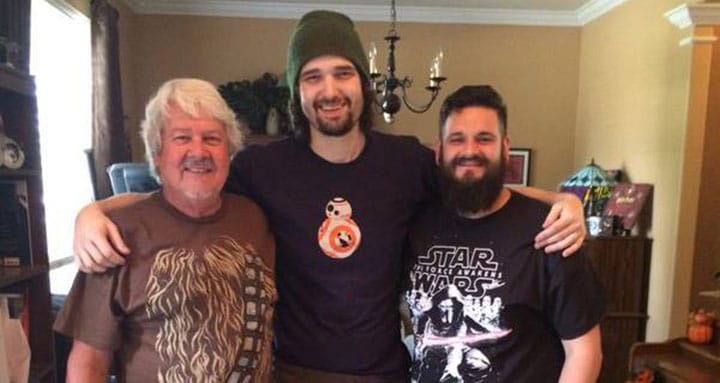 Daniel Fleetwood, a lifelong Star Wars fan, was given only two months to live, meaning he would never get to see the new Star Wars film.

You may have seen the #ForceForDaniel campaign that has been sweeping the web over the last week – we’re pleased to say that Daniel has been granted his wish!

For those who haven’t encountered the story before, Daniel Fleetwood, a dedicated Star Wars fan has been anxiously awaiting the release of Star Wars: Episode VII: The Force Awakens. Sadly, Daniel was diagnosed with spindle cell sarcoma, a rare form of connective tissue cancer in July and given only two months to live.

Since his diagnosis, Daniel’s greatest wish was to the new Star Wars film before he died, but he was fearful he would not make it. He and his family launched the “Force For Daniel” campaign with the intention of trying to get Daniel to see the film early.

Initially, Daniel’s wife Ashley posted to Facebook with this request:

With the backing of Star Wars fans and the /r/starwars community on Reddit, the request was shared tens of thousands of times, gathering local and then international exposure in the media.

The petition was backed by actors Mark Hamill, Peter Mayhew and John Boyega on Twitter and finally reached the ears of Disney, Lucasfilms and Bad Robot.

We are delighted to report that today, Ashley confirmed that Daniel’s wish has been granted. He got to watch the new Star Wars!

Daniel Fleetwood, ForceForDaniel, New star wars film, terminally ill, The Force Awakens
Read More
News
Strange superstitions from around the world
10 months ago
0 465
Other news
What three things should new investors understand about the stock market
1 year ago
0 754
Other news
How to mask your presence on the internet
1 year ago
0 796
Play at online casinos
Mr Green casino review