The Mail predicted “chaos” and “a tangle of red tape” as the 5p bag charge went live today. Turns out it wasn’t that bad and didn’t even cause cancer. 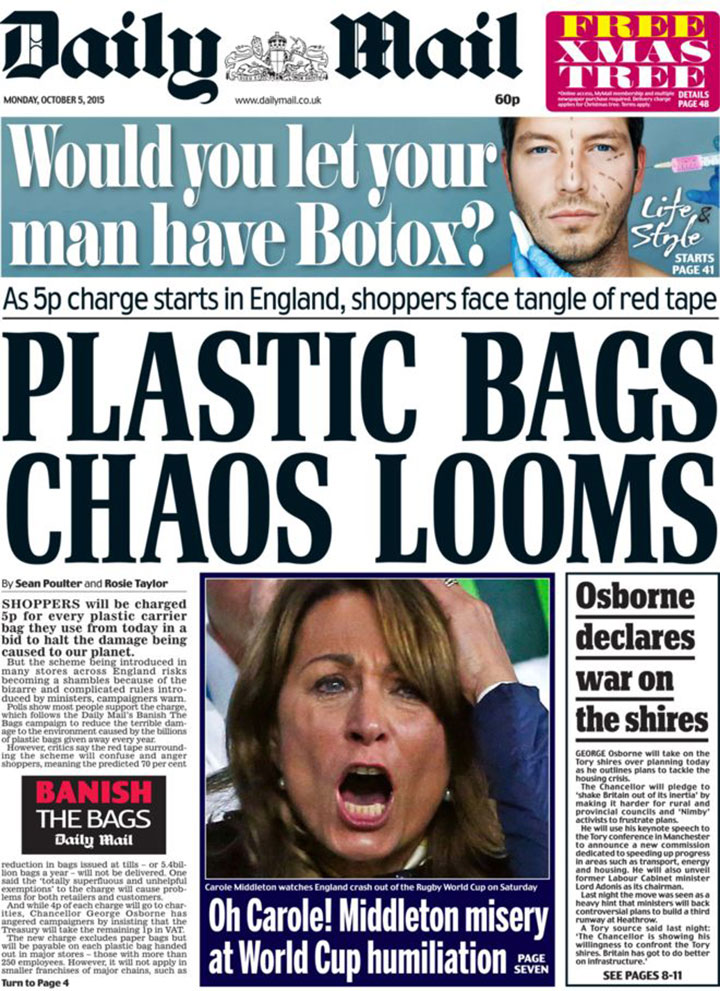 Picture from the BBC. Fair use, guv.

It turns out that charging shoppers 5 pence if they want a plastic bag isn’t the end of the world. Actually, as supermarkets in England dished out 7,640,000,000 (7.64 billion) of the things in 2014 and we’re the last country in the UK to charge for them, it’s probably quite a good thing.

The initiative hopes to raise £730m over the next decade by giving those 5p’s to good causes, as well as bringing about £60m in savings on litter clean up costs and £13m in carbon savings.

It’s a pretty plain ‘win-win’ for everybody involved; improved environment, more money for good causes and getting people into the habit of bringing their own bags.

Some people though, have got themselves awfully confused by the whole thing and see the charge as some kind of new stealth tax. The Mail on Sunday suggests you can “beat” the 5p bag charge by “saying no” and bringing your own bag… No shit.

GETTING PEOPLE TO DO THIS IS LITERALLY THE WHOLE POINT OF THE CHARGE YOU LOBOTOMISED SHITLARKS pic.twitter.com/4LtEwT7Jat

If you are one of those that staunchly wish to keep to your plastic bag consumption, it’s going to cost you on average less than £10 a year in bag fees, so don’t worry – if you want to be a selfish prick, it’s not even that expensive.

5p bag charge, bag charge chaos, daily mail headline, good causes, LOBOTOMISED SHITLARKS
Read More
News
Strange superstitions from around the world
9 months ago
0 457
Other news
What three things should new investors understand about the stock market
1 year ago
0 744
Other news
How to mask your presence on the internet
1 year ago
0 787
Play at online casinos
Mr Green casino review