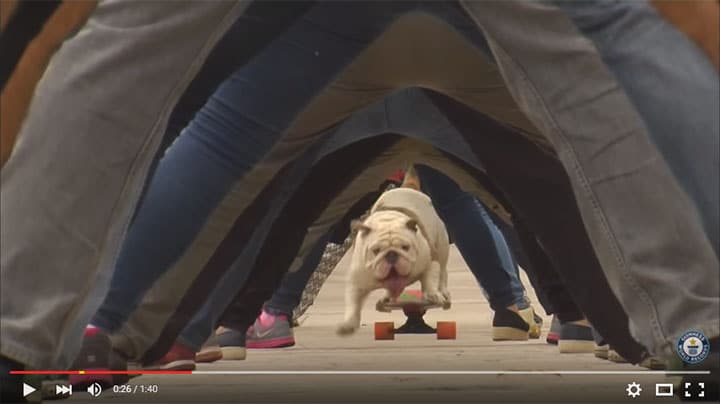 Otto. Literally risking it for a biscuit.

Otto, ‘the skateboarding bulldog’ now holds the Guinness World Record for ‘the longest human tunnel travelled through by a dog on a skateboard’.

If you can’t achieve a worthwhile world record, the trick is to go for something so incredibly specific and niche, the competition barely exists and when it does, it’s only other crazy people.

If that still doesn’t work, get your dog to do it for you.

Now legendary bulldog, Otto made an appearance in Lima, Peru to achieve the incredible feet of skateboarding between the legs of 30 people, thus earning him the Guinness World Record for ‘the longest human tunnel travelled through by a dog on a skateboard’.

The moment is perfectly summed up in the video at 1:17, when the Otto’s owner, Luciana Viale, triumphantly holds up the official certificate (on his behalf of course), which will no doubt find a prominent place in her home to act a ‘subtle conversation piece’ for every single visitor for the rest of time. The official Guinness judge has at this point started to lean back, subconsciously distancing herself from all the crazy and giving a polite “wtf am I doing here, I can’t wait until I get home to watch First Dates” smile.

ITV news described the post-completion celebrations as ‘wild’, with Otto snatching the record from the cold, dead paws of its previous holder, another bulldog named Tillman – who is now dead.

Presumably Tillman’s body couldn’t handle the vast amounts of coke at the ”longest human tunnel travelled through by a dog on a skateboard’ after-party.

bulldog, Guinness World Record, Lima, Luciana Viale, Otto the skateboarding bulldog, Peru, skateboarding, the longest human tunnel travelled through by a dog on a skateboard, Tillman
Read More
News
Strange superstitions from around the world
10 months ago
0 464
Other news
What three things should new investors understand about the stock market
1 year ago
0 753
Other news
How to mask your presence on the internet
1 year ago
0 795
Play at online casinos
Mr Green casino review