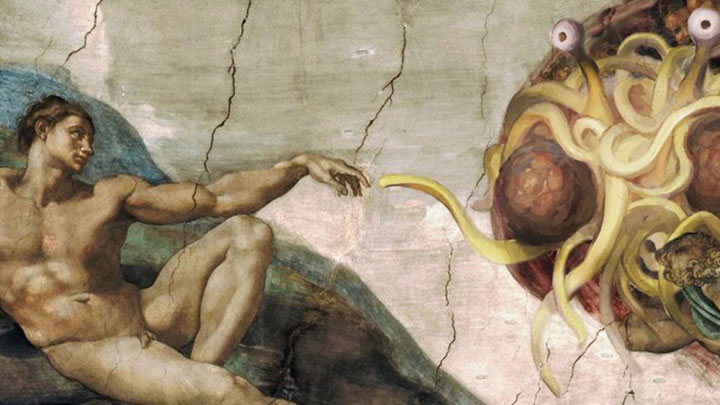 A pastafarian couple in New Zealand became the first couple to become legally married by a ‘ministeroni’ of the Church of the Flying Spaghetti monster last Saturday.

In fancy dress as pirates, Toby Ricketts and Marianna Young tied the knot on a charter vessel decorated as a pirate ship and exchanged “terms of engagement” instead of traditional wedding vows.

“I wouldn’t have got married any other way. A conventional marriage just didn’t appeal,” Young told Radio New Zealand.

“It’s a formal recognition that we are a church and that’s just great,” pastafarian – as adherents call themselves – Karen Martyn, who officiated the wedding, told news agency AFP ahead of the ceremony. “We will marry any consenting legal adults who meet the legal requirement,” she added.

The Church of the Flying Spaghetti Monster gained worldwide attention after Bobby Henderson wrote an open letter to the Kansas school board in protest of teaching intelligent design in schools back in 2005 and argued that believing in a god made of pasta was just as valid. The church has had a hard time gaining recognition.

The church has struggled to gain recognition in some countries but in others they have successfully campaigned to allow followers to wear religious attire, such as the colander headwear on official ID photos.

church of the flying spaghetti monster, FSM, legal marriage, Marianna Young, Toby Ricketts
Read More
News
Strange superstitions from around the world
10 months ago
0 464
Other news
What three things should new investors understand about the stock market
1 year ago
0 753
Other news
How to mask your presence on the internet
1 year ago
0 795
Play at online casinos
Mr Green casino review