Was this really a shark attack by “Jaws”?

Continuing the theme of “fuck the sharks” week, the British press gleefully picked up a story driving holiday makers into a frenzy of panic after a young boy was bitten during a brutal attack by a savage killing machine.

“Jaws scare for Benidorm Brits”, screamed the Sun, claiming the ten year old boy was “mauled by a 7ft beast”, during a “horror attack” whilst playing in the water off a packed beach in the seaside resort of Poniente. The Daily Star went even further; its leading front page of the printed edition declaring that there had been a “Jaws attack off Benidorm”, with the headline splashed over a toothy image of a tiger shark, although everybody else thinks it’s our old favourite, a great white. It’s not. Therefore it’s not Jaws, is it, you “journalists”, you.

The Telegraph was a little more circumspect, saying that the boy had been bitten – “possibly by a shark” and the creature was “believed to be a shark”, rather than claiming the Great White Death had risen from the depths to stalk and slaughter innocent sunbathers. 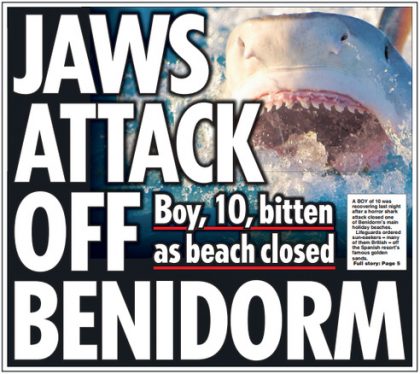 Has jaws, yes, but wrong species, so not Jaws. Image © Daily Star

The Daily Mail, in an unexpectedly un-biased, un-opinionated and un-characteristically non-sensationalist piece of reporting, said simply that the boy was bitten by a “mystery fish” which prompted fears of a shark attack, and described the monster as “2ft long” and a “’greyish-green’ fish”. Hardly the Leviathan that the red-tops wanted it to be then, isn’t it?

Moreover, The Mail reports that the boy was swimming with his goggles and was bitten after trying to touch the fish. Now – one can hardly blame a 10 year old boy for molesting an innocent sea creature, but it is rather well known that, when being pestered by a human, most wild animals will do one of two things – bugger off as quickly as possible, or snap in retaliation. The animals don’t even have to be wild, as anybody who has persisted in randomly poking a domestic cat and had their flesh clawed to ribbons as a result can testify.

Speculation as to the identity of the fish has included Barracuda (highly unlikely, given the size of their teeth and the fact that the boy is not missing a huge chunk of flesh) to a dogfish (maybe) to just a “large fish” (well, duh), but nevertheless, the local authorities chased panicked holidaymakers out of the water claiming that a shark was in the area, and closed the beach for half an hour whilst they went into the water looking for a fish. It’s very possible that they did, indeed, find fish in the sea, which is of course the domain of humans.