Nutella: It’s made with nuts, not newts

Forget ISIS, forget the migrant crisis, forget Corbyn, Trump and Putin; the most controversial debate of the decade has resurfaced after a recent article in the UK’s Daily Mail called into question the official pronunciation of “Nutella”, bringing a serious dilemma to the attention of a horde of previously uninformed chocolate spread fanatics. 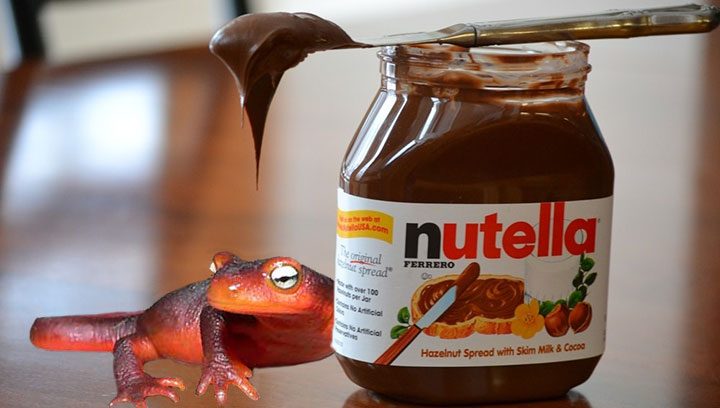 The world famous spread, so delightfully creamy and delicious that it makes even hardened atheists believe that there might really be a heaven, has, for ever and for always (well, since 1964) been known in the UK as NUT-ella, because it’s made with NUTS (Hazelnuts, to be precise) and chocolate. The announcement that it should be pronounced “NEW-tella” has caused widespread controversy, with both “nut-ella” and “new-tella” camps having their say on Twitter:

So I just found out Nutella should be pronounced new-tella! Ok so my life has been flipped upside down! Don’t even know whats real anymore!

Just saw the correct way to pronounce nutella is new-tella. What is life

Others commented that people in European countries pronounce the letter “u” as “oo”, and it’s true that there are many strange linguistics throughout the European continent. The French, for example say things like “WeeWee!” and “Mercy!” every time they sit down to dinner, or get invaded.

Nutella is, however, originally from Italy where it was first produced by Ferrero, but the Italian word for nut is “noci” (sort of), in which case if you want to be all European about it, then it should be called Nocitella, although this sounds like some sort of disease-inflicting bacteria.

Others tweeted such wisdom as “it’s NUT-ella not NEWT-ella because it’s made with NUTS and not NEWTS”, and the debate raged even further, with indignant commentators asking if the product was “nu-tella” as in “nu-metal”, which was not especially new, and not especially metal, but – again – it’s NUT-ella – because it’s made with NUTS! And chocolate! Creamy, chocolate-slathered NUTS!

Fortunately the Independent brought some sense to the matter, noting that the “new-tella” pronunciation is only relevant in the USA, quoting the FAQ on Nutella’s American website. When interrogated by Buzzfeed, Ferrero quite happily confirmed that pronunciation was variable by location, stating that “Ferrero aren’t trying to encourage a common worldwide pronunciation on this. In the UK we call it and pronounce it ‘Nutella’ as do consumers. The US pronunciation is just for them.”

That’s okay then. It still doesn’t make any sense, because there’s far more nuts in the USA than the UK, and anyway, most Americans also call it NUT-ella. Because it’s made with Nuts.

#NutsNotNewts, how to say nutella, new-tella, now to pronouce nutella, nutella
Read More
Other news
What three things should new investors understand about the stock market
1 year ago
0 753
Other news
How to mask your presence on the internet
1 year ago
0 795
Other news
Entertainment stocks in your stock portfolio
1 year ago
0 731
Play at online casinos
Mr Green casino review