This eBay clothing store is arousing a lot of attention

There’s something about this eBay clothing store which grabs our attention, but we can’t quite put our hands on it.

The shop sells clothing, including the skin-tight variety favoured by cyclists. And as any weekend rider will tell you, those cycling tops leave little to the imagination.

So when the store owner – a national duathlon athlete, no less – models the items that she and her partner have for sale, it sort of helps if the photographs look something like this… 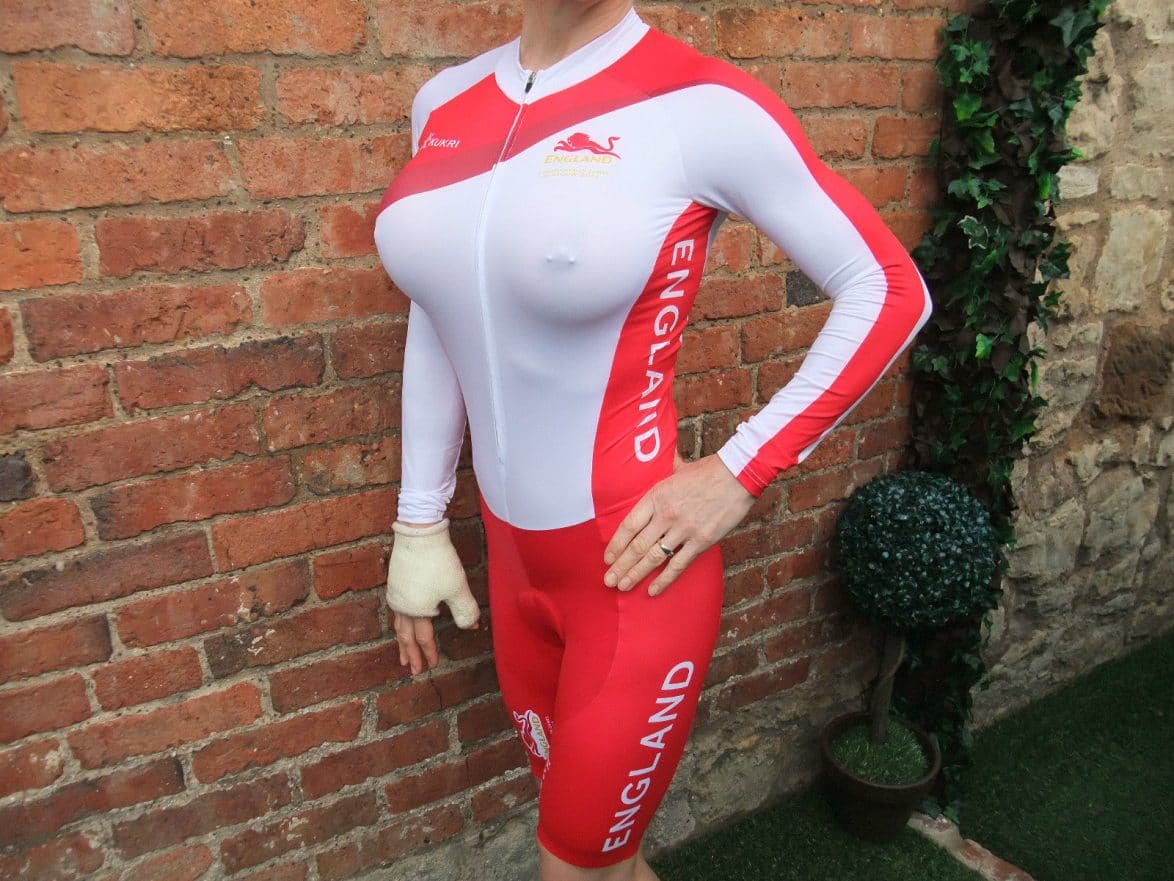 Figure-hugging: get your hands on this Team England Commonwealth Games track TT skinsuit for £79.99

Angel has established quite a following at her easy-peezy shop.

She is a genuine athlete, who recently qualified to represent England at the world duathlon championships in Spain. But she recognises her physique gets attention for her store, which often turns up on Facebook as a ‘sponsored post’ (this is how our Editor spotted it, he assures us).

Angel said: “I have received a lot of attention mainly from guys asking me out, and even a couple of girls, too, which I find very flattering. But I’m very happy with the man I have. I get mostly excellent compliments from both guys and girls asking about my training regime, and complimenting me on my figure and look.”

She said her partner is the “brains” behind the eBay operation. “He does all the directing when it comes to what I model and how I model it – he’s a budding David Bailey and loves to be behind the camera.” 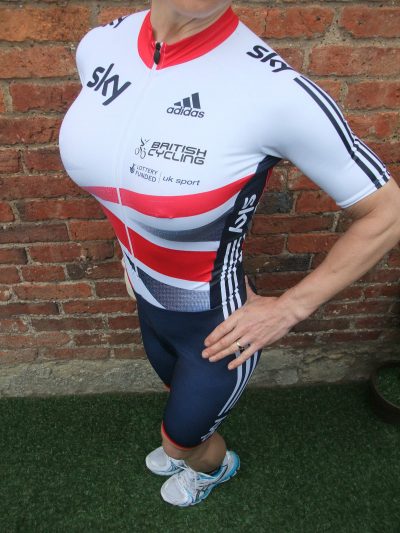 Focus: David Bailey couldn’t do better than this

But for all the positives, there are always one or two trolls. “I have had a couple of troll insults about me looking like a ‘tranny’ and ‘not normal’, which I find disgusting and derogatory to not only myself but also to the LGBT community, in which we both have a lot of friends and family.

“We just delete these messages straight away as I don’t care what these morons think of me – I am very happy and confident in the way I look and live my life.”

Angel (we have agreed not to publish her full name) has always been sporty, but it’s gone to a whole new level in recent years. She explained: “I have always enjoyed endurance training in the great outdoors, and I feel like it is in my blood to exercise. It helps me mentally as much as physically.

“It wasn’t until I met my partner ten years ago, who has been competing in mainly triathlons since 1985, that he saw my potential to race competitively and encouraged me to do so. I have never looked back since!” 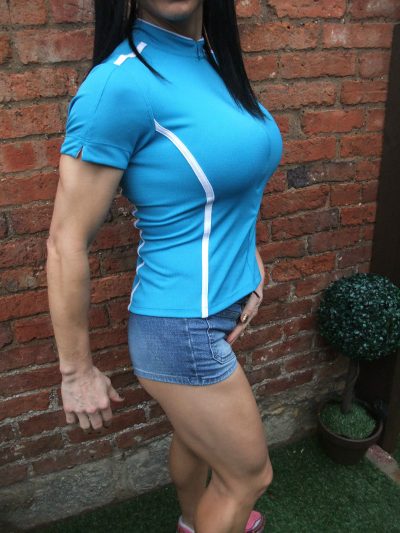 Out in front: Angel is used to winning

It’s not all been plain sailing, with injury problems a regular feature. “I have suffered with a quite a few injuries over recent years, and had seven operations,” she explained. “And when I had two years out of endurance training due to a torn knee cartilage, I fulfilled a burning desire to have a good go at bodybuilding.

“With the help of an ex Miss Universe I competed in the north-east of England championship at ‘trained figure’, and on the second year I came fourth overall, winning a lovely trophy!

“I have now got fit again, and over the past three years I have won the national duathlon (run 10k, bike 40k, run 5k) championships three times in my age group of 45-49 year olds. 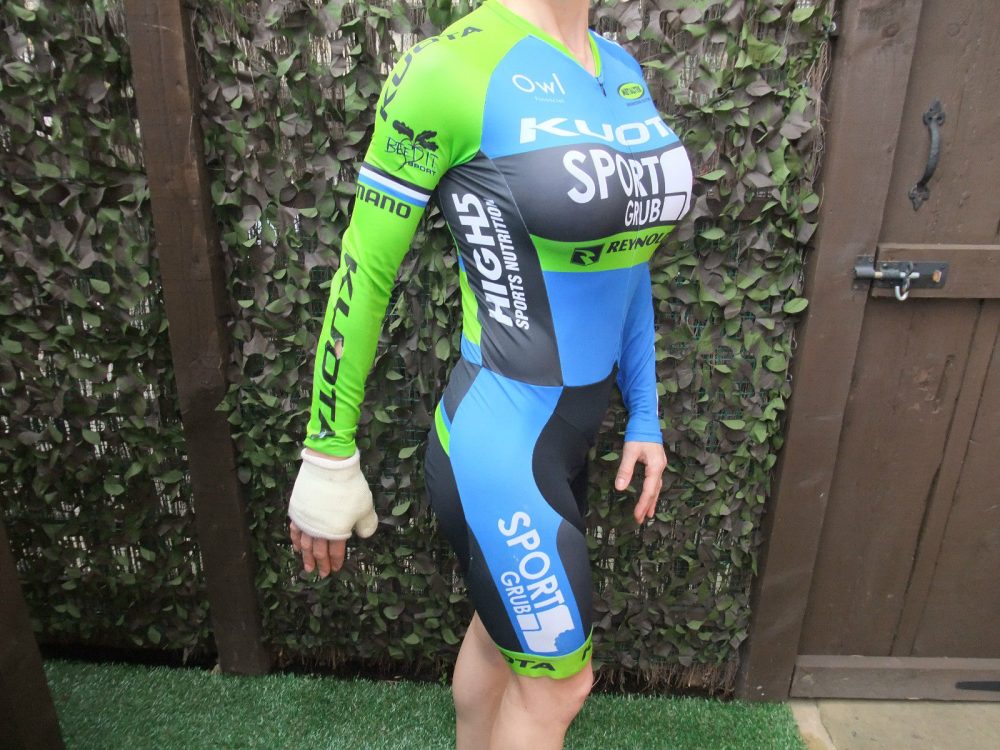 Winning in competitions and online auctions at her ebay clothing store

Unfortunately there was another set-back. Angel said: “This year me and my partner qualified to race for GB at the world duathlon championships in Spain, which is held next week. But unfortunately I fell out of the bath when reaching for a towel and badly broke my thumb and tore my ligaments (hence the bndage on my hand in some of the eBay store pictures).

“So I am no longer able to ride my bike, and therefore unable to compete until I recover. But I am looking on the bright side and hope to go to the world championships next year.

“My motto is, ‘Train hard, race easy’, but I am not just a slave to the gym and training, as I enjoy many other social activities, mainly with my partner and family.”

cycling, cycling jersey, duathlon, ebay, ebay clothing store, gym
Read More
Other news
What three things should new investors understand about the stock market
1 year ago
0 745
Other news
How to mask your presence on the internet
1 year ago
0 787
Other news
Entertainment stocks in your stock portfolio
1 year ago
0 724
Play at online casinos
Mr Green casino review