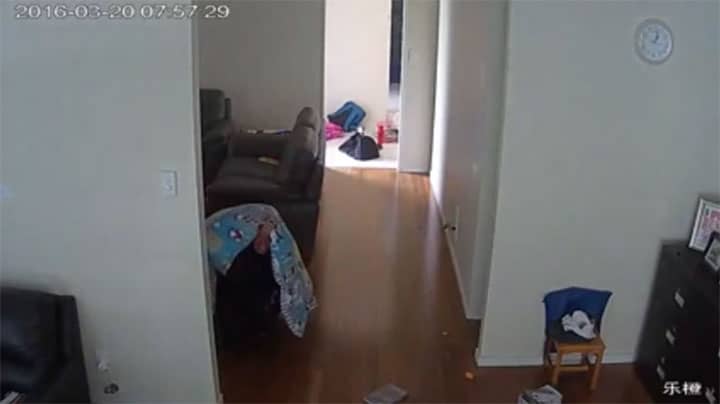 Probably shouldn't have looked directly at the camera

Police are appealing for help catching this ‘under cover’ thief as he is caught on camera, crawling around a house trying to hide under a children’s blanket.

New Zealand police are looking for the burglar who tried to rob a house while using the children’s blank as cover. While crawling from cupboard to cupboard, looking like some brightly-coloured, poorly adapted, soft-shelled tortoise, the thief took cash and jewellery from the home.

Counties Manakau Police posted the plea to their Facebook, hoping a local would be able to identify the man.

We need your help to identify the male in this video who carried out a burglary in Dannemora on the morning of March 20 2016. Sergeant John Roberts of the Counties Manukau Police Tactical Crime Unit says the male has covered himself with a duvet and crawled around the house stealing a number of items including cash and jewellery. The offender has been caught on internal CCTV footage. Police are looking for a male Caucasian, aged in his 20s, and of slim build.Any information on who this person is can be provided to Sergeant John Roberts on 09 261 1300 or anonymously via Crimestoppers on 0800 555 111. Thanks

The video shows the man looking directly at the camera, before slowly crawling from place to place, trying to stay hidden and presumably, warm.

child's blanket thief, childrens blanket thief, new zealand, thief, thief in blanket, undercover thief
Read More
News
Strange superstitions from around the world
9 months ago
0 456
Other news
What three things should new investors understand about the stock market
1 year ago
0 744
Other news
How to mask your presence on the internet
1 year ago
0 786
Play at online casinos
Mr Green casino review